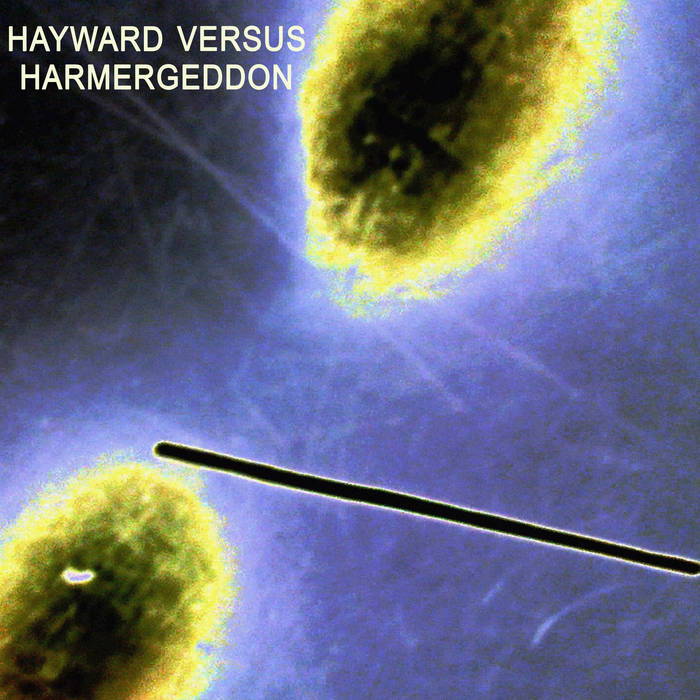 Jacampanman Wow! If the single preview track is anything to go by, this could be one of the best things that Charles Hayward has ever been involved in. I can't wait till the full album is released!

HAYWARD VERSUS HARMERGEDDON is collaborative encounter, a cooperative sonic wrestling match and the only winner is the listener, a right earful of sound and plenty more for the other one, too. 1, 2, check, 1, 2, testing, 1, 2, are you listening?

Charles Hayward says “This record is a head to head between HARMERGEDDON and me. I first heard Harmergeddon 8 or 9 years ago and was instantly tranced out by their sound and their intriguing attitude to time, which operates at a different, alien register, almost like a Jackson Pollock canvas or Wiley Coyote running off the edge of a cliff. Ever since forever, before the words, I love when pure sound occupies the centre stage, removing emotional signs so that there’s room for the audience to engage creatively; playing with Harmergeddon and their sound made me change my way of working, my way of playing the drums, another zone where time is prime, beat fracture and tempo shift. Another zone.
We’d been talking about making something together for a while and I jumped at the chance when the opportunity finally came along to record with Nathan and Fae at my space in Lewisham Arthouse. We took a couple of days and recorded several hours each day. They work in the dark because the lights give too much hum, it’s a very nice atmosphere before the sound even starts. It was great to do.
Then Nathan took away the recording and did his strange magic with what we’d made. They sent me sections they liked, I’d listen and suggest edits and mix details. Sometimes it would be 2 steps forward, 1 step back. Some details took much longer than others. I’d already encountered Nathan’s unusual angle on recorded sound when he mastered my solo record Begin Anywhere in the most arcane and invisible way, so subtle it’s unreal. It’s the same again with Versus, so hopefully you’ll get more and more from this record the more you play it.”

HARMERGEDDON says “They split the atom, but we stuck it back together again!
We’ve known Charles for a while now and had the great opportunity to tune into his creative space, seeing and hearing various collaborations and solo projects over the years as well as jamming with him on occasion, we’re always entranced by his seemingly effortless navigation between the autonomic and the cerebral, it makes sense but it also feels right and it’s happening right now.
We feel this collaboration resulted in a record that was like organised chaos, a blend with depth beyond it’s surface. Texture framed by grid, glaciers and landmarks, mirage and desert, light and sound, existing on one plane with all the contrasts bouncing off of each other like a good conversation.
During one of the recording sessions, Fae recalls feeling the synchronicity between her performance and Charles’, looking up to expect to see him watching her movements in order to predict where we were going next only to find him there with eyes closed, picking up on the flow like it was obvious, intuitively navigating the space between perception and gesture like it was brushing his teeth in the morning.
This discourse between the three of us felt like a good model to bring forward, because if structure and chaos can get along, it bodes well.”
harmergeddontv@gmail.com
www.harmergeddon.tv

This Heat's Charles Hayward collaboration with London based Harmergeddon